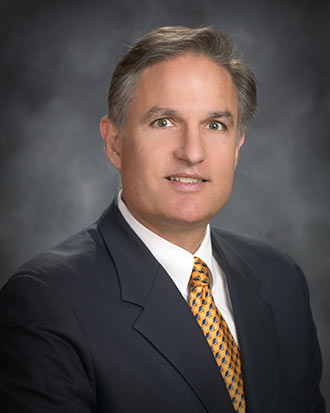 As a full-time, dedicated Trial Lawyer since 1980, Tom Beach has tried over 150 jury trials to conclusion in State and Federal Courts throughout California, Washington, Texas, Nevada and Oregon.  In recognition of his successes in trial, he was elected to the American Board of Trial Advocates (ABOTA) in 1987 and later elevated to the highest ranking of Diplomate in 2012.  His awards and recognition include:  American Board of Trial Advocates (ABOTA) – Diplomate; ABOTA Trial Lawyer of the Year – nominee 2013, 2015; Ventura County Trial Lawyer of the Year – nominee 2008, 2011 and 2012; Southern California “Super Lawyer” (Medical Malpractice 2010-2018); and “A-V Preeminent” (highest possible rating) by Martindale Hubbell for both Legal Ability and Ethical Standards.

Mr. Beach received his undergraduate degree from the University of Southern California and his Juris Doctorate from Pepperdine University School of Law. He is admitted to practice in the United States District Court for California’s Southern, Central and Northern Districts.

Mr. Beach has two grown children and enjoys living in Camarillo with his wife.  An avid cyclist, he can be found most weekends riding with local bike clubs near his home.